Home » REGIONS » Namaqualand » Rock paintings
Back to Category Overview
Total images in all categories: 12,058
Total number of hits on all images: 7,353,504 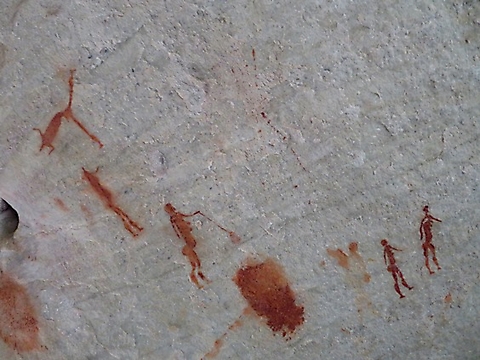 Before humanity invented writing, the heart-felt longings, statements and prayers were drawn on rockfaces. These pictures still speak to people across millennia, resonating with undefined content in the psyche of the observer, irrespective of which nook or cranny of human society he or she calls home.

Whether the artist records what he had experienced or posts a notice to visitors who may arrive during his absence about who lived here and what they were about, the painting is undifferentiated from his artistic expression. This was similar in olden times when philosophy in our own culture still included all the other branches of learning.

Art could be art as well as an ultimatum for war or simply pious worship. Bold messages to all strangers in the Kilroy was here sense proliferated on rock walls across Africa, not protected as well as heritage deserves to be. Many are still intact, conveying messages including: have respect, time flies and memento mori (Lhote, 1959; www.cavern.co.za).