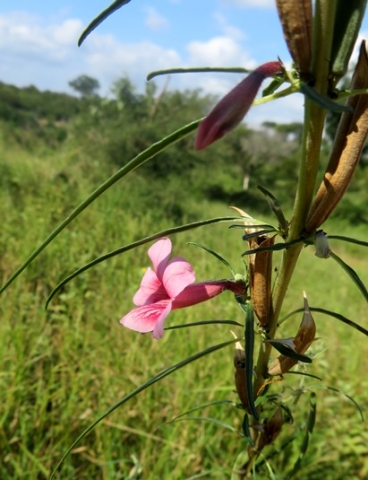 Sesamum alatum, the wing-seeded sesame, is an erect annual reaching 1 m in height. The unbranched stems are hairless. The generic name, Sesamum, is the Greek name for a related herb, S. indicum from India (and maybe East Africa). That plant yields the edible sesame seed from which oil is also obtained. Alatum (Latin) means winged.

The plant in picture seems to have been inspired by late rain to have a second go at production. Small branches from the nodes where fruit capsules, even dry ones, are already present have produced new flowers again; commendably industrious for an annual!

The species is widely distributed in the northeast of South Africa, from KwaZulu-Natal across the provinces north of the Vaal River to North West. It also grows in Namibia, Botswana and maybe further afield in southern Africa.

The habitat is open woodland and grassy floodplains where the plants grow in sandy soil, often in disturbed places like roadsides. The species is not considered to be threatened in its habitat early in the twenty first century.