Home » TYPES » Herbs » Silene bellidioides
Back to Category Overview
Total images in all categories: 11,523
Total number of hits on all images: 6,599,409 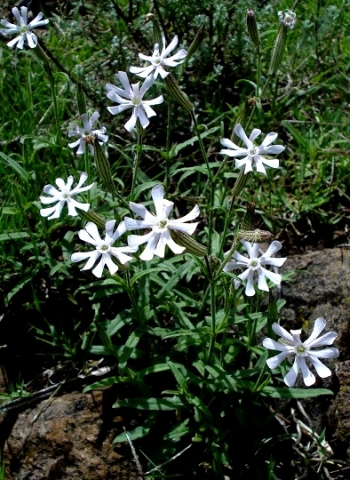 Silene bellidioides, sometimes commonly called the gunpowder plant and maybe to undergo a name change to S. undulata subsp. undulata, is a soft perennial herb that grows to 60 cm. The sparsely branched, erect stems are covered in sticky hairs. The leaves are opposite, narrow and linear or narrowly lanceolate. Stem leaves are sessile or stalkless, the midrib prominent on the lower surface.

The hardy plant is found widespread across South Africa, recorded in Namaqualand as well as in KwaZulu-Natal, the Karoo, the southern Cape and north of the Vaal River, often in open grassland or near watercourses. This plant was seen in eastern Lesotho. The species is not considered to be threatened in its habitat early in the twenty first century (Van Wyk and Malan, 1997; Bond and Goldblatt, 1984; iSpot; http://redlist.sanbi.org).