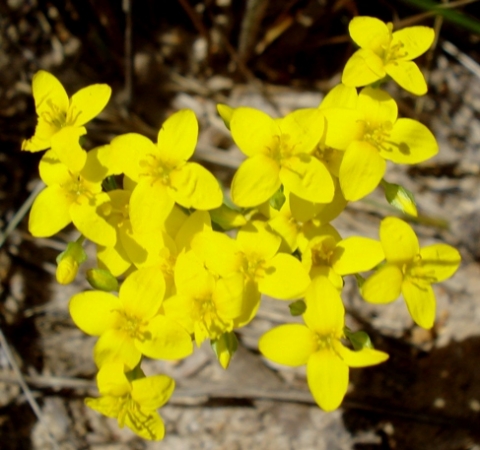 Sebaea aurea is an erect annual, a short-lived herb branching near the top. The plant may reach 30 cm, but is often well shorter.

Its pale green leaves are opposite, spaced along the soft stems and hairless. Leaf shape is ovate, tapering to pointed tips. Leaf texture is fleshy, glistening in sunlight. Leaves become up to 1,5 cm long.

The species distribution is in the Western and Eastern Cape from Clanwilliam to Port Elizabeth. The habitat is lower slopes and flats characterised by often being sandy and moist. This plant was seen in the Kogelberg in November.

Twenty of the sixty Sebaea species, part of the Gentianaceae family, are found in the fynbos. The plant is not considered to be threatened in its habitat early in the twenty first century (Manning, 2007; Privett and Lutzeyer, 2010; iSpot; www.redlist.sanbi.org).