Home » TYPES » Herbs » Sebaea exacoides
Back to Category Overview
Total images in all categories: 11,656
Total number of hits on all images: 6,771,199 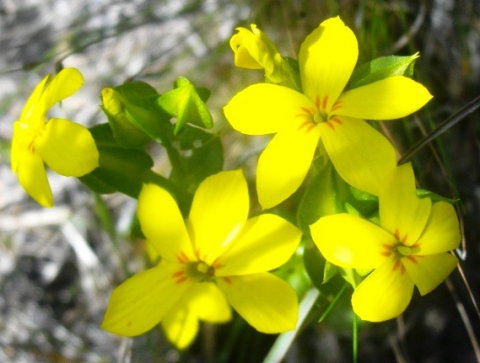 Sebaea exacoides, commonly known as yellowwort or naeltjiesblom (hyacinth flower) in Afrikaans, is an annual reaching 30 cm in height. It has oval, opposite leaves and branched stems.

The flowers are five-petalled, yellow or cream coloured with two short, parallel orange lines at the throat. The stamens do not protrude from the corolla tube. Flowering happens in late winter and spring.

The species distribution is in the Western Cape from the Bokkeveld southwards. The photo was taken near Greyton in September. The species is not considered to be threatened in its habitat early in the twenty first century.