Home » TYPES » Herbs » Scabiosa columbaria in the Hartebeestfontein Conservancy
Back to Category Overview
Total images in all categories: 11,538
Total number of hits on all images: 6,618,637

Scabiosa columbaria in the Hartebeestfontein Conservancy 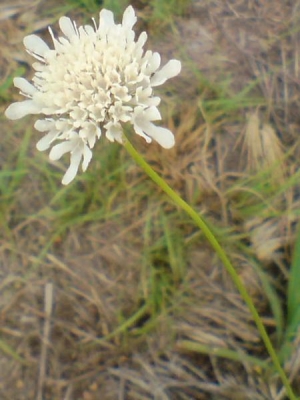 Scabiosa columbaria, commonly known in Afrikaans as bitterbos (bitter bush) or jonkmansknoop (young man's button), is a tufted perennial reaching 80 cm in bloom. The leaves are mostly clustered at the base and hairy. The lower leaves are obovate or paddle-shaped with toothed or lobed margins, the upper ones deeply incised forming narrow lobes.

The flowers are borne in tight heads of 3 cm in diameter on long peduncles. Each flower is surrounded by a secondary calyx or collar. Flower colour is white or mauve. Flowering happens in spring and summer.

The species is distributed widely throughout South Africa, excepting parts of the western Karoo and arid inland, extending much further across Africa, Asia and Europe. It grows on rocky slopes in variable conditions and habitats. The species is not considered to be threatened in its habitat early in the twenty first century (Manning, 2009; Vlok and Schutte-Vlok, 2010; http://redlist.sanbi.org).