Home » TYPES » Herbs » Bertilia hantamensis hard times
Back to Category Overview
Total images in all categories: 11,104
Total number of hits on all images: 5,772,153 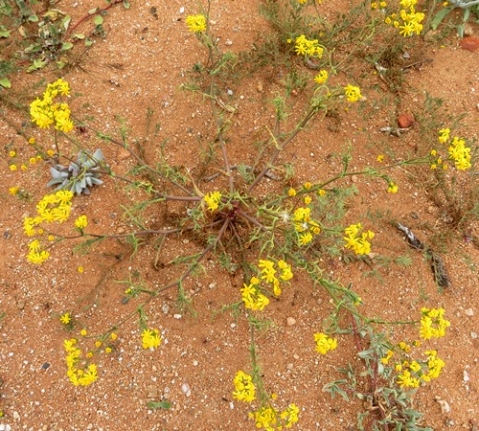 This mature Bertilia hantamensis plant growing in sandy soil north of Springbok is flowering well in spite of leaf scarcity. A rounded shape has been achieved by the several long branches, although space predominates in the plant's sparse frame.

Flowering in August after rain, the sun is already relentless upon plant and sand. Minimal shade is cast for protecting moisture around the roots.

A long, hot, dry season awaits the annual herb. Its tribe is adapted though for performance on the one act stage of plant flowering drama. Seed will be set soon, if some herbivore does not eat it first (Manning and Goldblatt, 1997).