Home » TYPES » Herbs » Bertilia hantamensis
Back to Category Overview
Total images in all categories: 10,845
Total number of hits on all images: 5,499,065 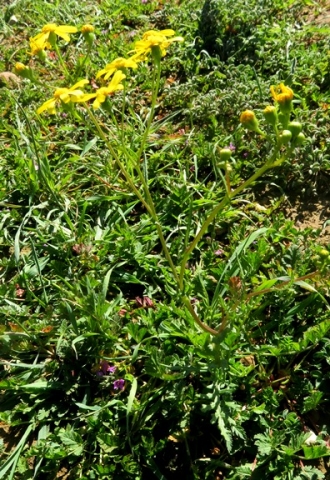 Bertilia hantamensis is a soft annual growing from a weak root system and reaching heights from 12 cm to 30 cm. Branching occurs mainly low down. The initially cobwebby branches and leaves are later smooth.

Bertilia is a monotypic genus (comprising only one species). It is more closely related to the Bolandia and Cineraria genera of daisy flower plants than to the rest of the Asteraceae family.

The distribution of B. hantamensis, a Northern Cape endemic, lies in a restricted area from Loeriesfontein to Nieuwoudtville, Calvinia and southwards along the Roggeveld Escarpment. The photo was taken on the Matjiesfontein farm near Nieuwoudtville.

The habitat is fynbos and succulent Karoo where the plants grow on dolerite outcrops and flats in heavy red clay soils. The species is not considered to be threatened in its habitat early in the twenty first century (Cron, GV, 2013: A New Monotypic Genus in the Senecioneae (Asteraceae) in SA. SA Journal of Botany, Vol 88, pp 10 – 16; iNaturalist; http://redlist.sanbi.org).