Home » TYPES » Herbs » Bolandia pinnatifida florets in different stages
Back to Category Overview
Total images in all categories: 11,110
Total number of hits on all images: 5,776,847 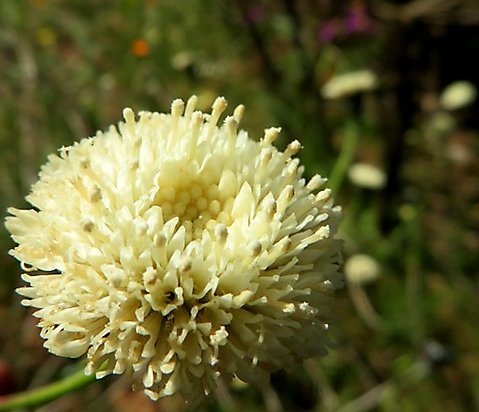 The florets of a Bolandia pinnatifida flowerhead start opening steadily from the outside, the outermost row of the discoid head first. The buds start off in a flat configuration which becomes increasingly spherical as more rows of them open. The last florets to open are thus on top in the centre, where globular buds can be seen in picture, in irregular rings of diminishing size. The five corolla lobes of each floret are pointed and erect or curving out in a narrow funnel.

The stamens resembling matchsticks become exserted first once the corolla lobes have spread, seen in some young florets near the centre, though not immediately after floret opening. The styles are exserted slightly later, seen on some flowers further out from the centre, their tips branched and curving.

Flowering happens in spring. The photo was taken on September (Bond and Goldblatt, 1984; iNaturalist).