Home » TYPES » Herbs » Ballota africana hairy whorl
Back to Category Overview
Total images in all categories: 12,058
Total number of hits on all images: 7,353,523 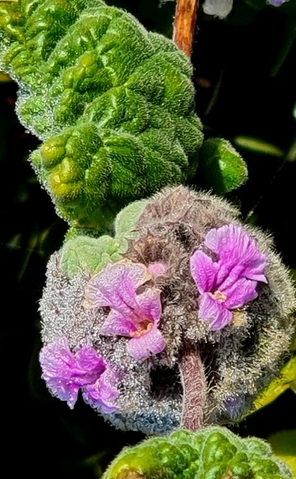 Three pink-purple Ballota africana flower corollas remain in picture of the dense whorl of flowers that grew from a leaf axil. The bracts below the flowers are green but paler than the leaves, lacking the leaf gloss while sharing the hairiness.

Some buds may still open here, the predominating calyces densely grey-haired inside and out, continuous across the whorl. Each calyx has from 10 to 20 sepal tips or teeth. The two-lipped corolla has hairs in its throat. Two unequal pairs of stamens are also present there.

The best known Ballota species is B. nigra, commonly the black horehound, a perennial exuding a strong mouldy odour. That plant is indigenous around the Mediterranean, in Europe and central Asia, while also naturalised in many other parts of the world. The South African species is, among other names, also commonly known as the Cape horehound.

The ancient Greek name of B. nigra was ballote, from which the modern scientific name of the genus was derived. Ballote was in turn derived from the Greek word, ballo, meaning to reject, on account of the plant’s offensive odour that makes cattle avoid it when choosing what to graze and browse (Manning, 2007; http://pza.sanbi.org; iNaturalist; Wikipedia).