Home » TYPES » Herbs » Bolandia pinnatifida before and after florets open
Back to Category Overview
Total images in all categories: 11,104
Total number of hits on all images: 5,771,558

Bolandia pinnatifida before and after florets open 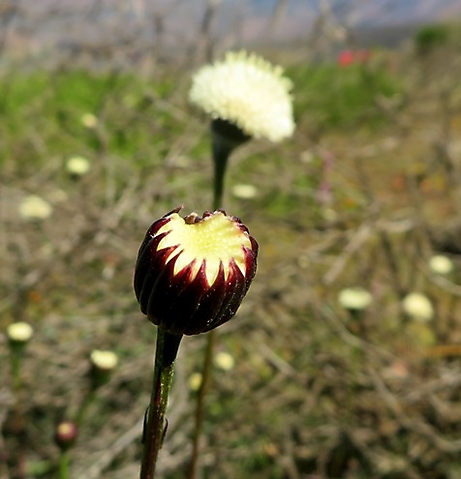 The effects of Bolandia pinnatifida disc floret elongation and maturation are illustrated by the two flowerheads in the foreground.

The younger head has floret buds still shorter than the pointed, maroon-brown bracts around them. Not quite a bud itself any longer, the head has straightened the involucre by now from incurving, the bracts forced outwards into a cylinder by the elongating bunch of floret buds. Only the bract tips still curve in.

In the second head the involucre has been overwhelmed by the hemisphere of creamy white, open florets that have taken over and pushed outwards, wider than the rim of the cup below (Bond and Goldblatt, 1984; iNaturalist).