Home » HABITAT » Habitat diversity » Pelargonium tetragonum draped over its neighbours
Back to Category Overview
Total images in all categories: 11,544
Total number of hits on all images: 6,627,511

Pelargonium tetragonum draped over its neighbours 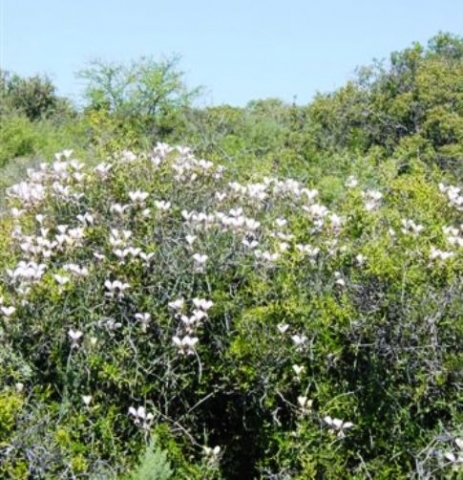 Much branching characterises the dense display of this Pelargonium. The plant scrambles over neighbouring shrubs wherever the opportunity presents itself. The stems have sporadic joints or nodes where further branching, leaves or flowers may appear.

Little Karoo scrub habitat has many kinds of sturdy bushes like Searsia (taaibos) or Euclea (guarri) that offer firm support structures for climbers such as these. Pelargonium tetragonum takes great liberties with private property, body parts of neighbours, easily redefined as communal support framework available in the Little Karoo thicket. The flowers of this plant may bloom two metres above-ground for the meandering stems love a little help from their friends. Only the unlucky seed germinates where the plant must ramble solitary on the ground.

Common cohabitation among plants produces patches of shade and shelter for use by the delicate smaller plants, like the many Adromischus, Haworthia, Huernia species and more, as well as small mammals, birds and insects that live here. Many members of this ecological partnership welcome the occasional break from direct sun or harsh weather known in the Little Karoo.

The attributes of living things possess mysterious functionality from millennia of such give and take. Survival partnerships in nature are remarkably diverse. Solutions shared by unrelated neighbours come from sharing space and other resources. Cooperation that humanity sometimes only dreams about! The identity or nature of every species is continually adjusted by its support structure. Juxtaposed living entities hone each other and are honed just from living together, generation by generation.

So many millions of cause and effect events are driven by these complex forces that people may unravel their meaning more slowly than the rate at which the complexity expands. Conceptually all of it can be rationally explained, the scientists eventually find, when from time to time they fathom another part of how life works, bit by bit. In the real world, all of this happens in such non-cerebral fashion that people call it nature.