Home » HABITAT » Habitat diversity » One kiepersol, many feroxes
Back to Category Overview
Total images in all categories: 12,068
Total number of hits on all images: 7,360,794 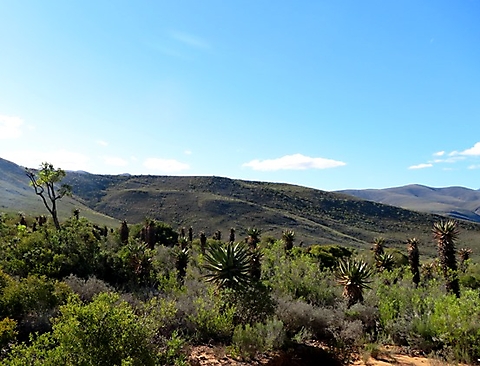 As far as the eye can see there is only one kiepersol or Cussonia tree in this panorama in the Kouga. The focus is quickly on the Aloe ferox colony comprising plants of several heights, meaning many different ages. Younger ones are not all visible above the tall bushes scattered in veld that hasn’t burned for many years.

Minorities of many plant species abound in the rich multitude that makes up the magic that is natural veld, here as in so many places on earth. Counting plants will reveal that there are a few species that dominate in numbers, while a list of reducing numbers of many common species can be made, down to the rare presence of species that surprise only once on a long walk.

There may be a small kiepersol or two hiding nearby, or the next one might arrive here only in a few decades. Guarri and other big bushes, elsewhere reaching small tree status, are scattered as residents of long standing. They add to the range of additional plant and animal life that makes it here by providing protective covering.

Mutual benefits facilitating survival arise for all that live from countless specific features shared among the residents of a neighbourhood. This expands the complexity of the vegetation mix in unique ways, resulting in an earth never copying ecologies anywhere.

Even consecutive years don’t repeat nature in any spot, due to rainfall, temperature and other variable conditions. Annuals like some daisies may be visible here in reduced periods only, growing and blooming in their particular season and vanishing in the too hard times. Bulbs do the same. They protect their perennial parts underground, while waiting for rain or the annual temperature increase to flower and set seed, before disappearing into the next rest cycle.

Many pollinators are adapted similarly and aligned with their plant partners: Active flying about in seasons of consuming pollen, nectar and leaves are spaced cyclically by dormant seasons. This is when they wait in egg form for next year’s reappearance and another run in the rhythm of life, where their favourite flowers await ready with pollen and nectar.

Countless interdependencies across the biodiversity spectrum have evolved between plants and animals, creating survival partnerships. Life's gifts to all those negotiating the difficult patches, constitute the miracles of nature. Miracles on earth don't occur when the laws of nature are violated, but every time when they are revealed.

In the far-off kloofs or ravines, over there where water may flow seasonally into the Kouga River, dense riparian forest forms meandering strings of contrasting life forms, continuous across the land as shaped by water over rock. The tall, woody hosts that last there for many decades or centuries if left alone, provide for still more plant, animal and other living entities to try their luck in differently structured micro-ecologies.

The commercial carrying capacity of this land may not be great among its large component of renosterbos on rocky slopes, but it is friendly to a huge diversity of species adapted to light living, using what is available with a minimum of destruction of those around them.