Home » HABITAT » Habitat diversity » Ozoroa dispar where trees are rare
Back to Category Overview
Total images in all categories: 11,416
Total number of hits on all images: 6,192,737

Ozoroa dispar where trees are rare 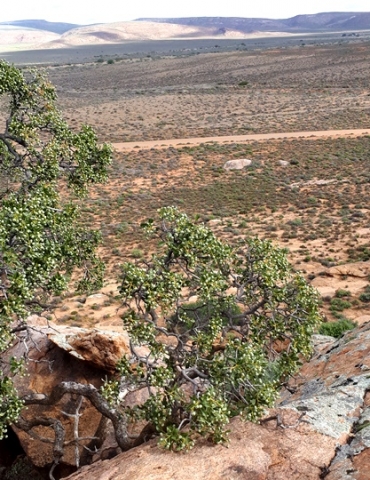 The panoramic Namaqualand view from a klipkop (stone head) perch near an Ozoroa dispar tree consists of a sparsely vegetated plain and more klipkoppe.

Namaqualand is geologically positioned centrally in the Nama System that ranges from Garies to Rehoboth in Namibia. The klipkoppe forms a north-south escarpment between Bushmanland to the east and the coastal plain in the west. Its granite is older than that occurring to the south in the Western Cape.

The higher mountainous part of the region is found in the Kamiesberg east of Kamieskroon, where even some Protea and Erica species grow naturally.

Way back, what is now Namaqualand was known as Little Namaqualand, the southern Namibian region called Great Namaqualand. The Nama tribe that for long occupied Namaqualand are remembered in the name.

While O. dispar grows among the klipkoppe, some other local tree species like the thorn trees tend to occur along the seasonal lowland watercourses, including Vachellia karroo (Mannheimer and Curtis, (Eds.), 2009; Le Roux, et al, 2005; Coates Palgrave, 2002; Eliovson 1990; iNaturalist).