Home » HABITAT » Habitat diversity » Ornithogalum toxicarium
Back to Category Overview
Total images in all categories: 11,416
Total number of hits on all images: 6,192,665 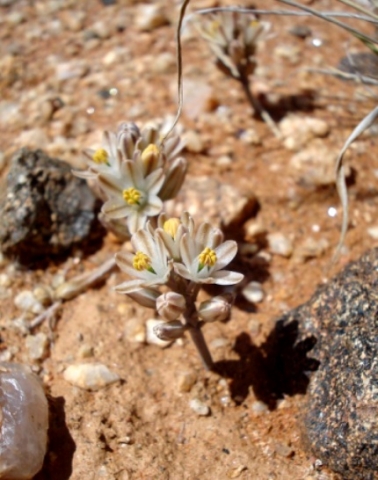 Plants of high rainfall regions have cousins in arid lands. Those in the tropics often belong to the same genera as plants that cope well with frost, snow and icy winters. Adaptation brings comfort over many generations for living with the given. Each environment retains more easily the offspring of resident species that thrive in it. The battling ones that die before breeding are discontinued, making death not only a leveller, but a selector.

The more the generations that come and go, the more the differences between representatives of the same species facing different demands in different places.

Ornithogalum toxicarium grows in arid South Africa and the even harsher climate of Namibia. It has well-known relatives in the lush green fields near the south coast, just as the city mouse lives a different life to the farm mouse, eventually looking different.

This plant’s toxicity that can kill, may work like thorns or spines in other plant families: Keeping the hungry at bay!  Each survivor species does its own thing. Other relatives in a genus may not need toxicity… or thorns, and eventually lose whatever unused resources had become redundant.

Until a new threat arrives to instil an appropriate defence mechanism.