Home » HABITAT » Habitat diversity » Protea cynaroides among unlike neighbours
Back to Category Overview
Total images in all categories: 11,416
Total number of hits on all images: 6,192,746

Protea cynaroides among unlike neighbours 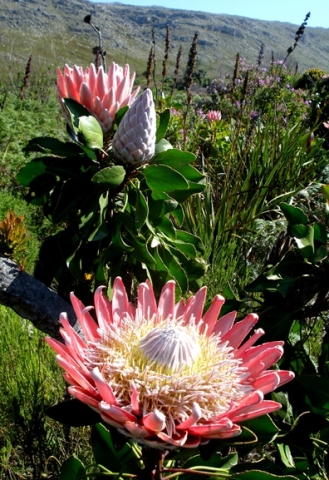 Large flowerheads and big leaves of Protea cynaroides appear next to a dwarfed Passerina plant and the strap-leaved blue-flowering but now fruiting Aristea. Further along, some tall pink pelargoniums add more variety. Just the stuff people yearn to see after being too long among city throngs.

Observation starts off keenly in new surroundings. In the city it reduces to staying safe among pedestrian or vehicle traffic. Registering every movement and obstacle significant to own progress happens without featuring in the mind. As long as it remains within its familiar, implicitly predicted pattern, it can be forgotten once passed; physically close but personally distant.

In the veld the high energy stage lasts longer, particularly for those first time back after a longish break. Even here attention will fade gradually, but peace takes over rather than zombie mode. The looking goes inwards. Blurred sensations from somewhere trigger silent processions of notions hovering in the welcome solitude.

Rocks and branches behave like courteous companions if the few dedicated brain cells for acknowledging them in passing are switched on, causing no disturbance while the mind consumes the hours in a good place, not necessarily near.

Jung distinguished between personality types inclined to thinking and others tending to feel. Was I thinking or merely feeling? Doesn't matter! Nobody does just the one thing all the time, so it may be a half type, half trait phenomenon. Different cultures favour the one over the other, a fascinating subject in itself. Rather believe that one can do different things at different times than be stuck in the repetition box of unadventure.

For there are nature lovers among both these and every other bookish human nature type psychology dreams up. The veld reduces typecasting, removes unhealthy labels. If you doubt this, check the research on the incidence of snake-bite or bee-sting among introverts and extroverts.

The bush, the veld of any kind, the river, the sea, the desert and the mountain all turn people into worshipping observers of the beauty around for bringing peace within and making minds whole again. On some days one can literally feel the liberation from the free man's gaol of restrictive thought.

Cleansed, the mind explores new ways on offer; testing frontiers or carrying on regardless. Fit the mould or fly high? As long as there's life, there's hope, after all!

During every visit to the bush an issue on the retained list may re-open in the mind. Value is added faster if the options become "and", rather than "either-or". There are features of self, cycles of energy, curiosity, enterprise and daring to respond to one's share of serendipity for shaping a worthwhile journey. The cliche of every life being unique still has its moment.

Such spring cleaning of the mind is what the bush is for, on those days one does not feel like concentrating on every detail or lose the miles in conversation.