Home » HABITAT » Habitat diversity » Rain spider nest in kooigoed
Back to Category Overview
Total images in all categories: 12,087
Total number of hits on all images: 7,393,082 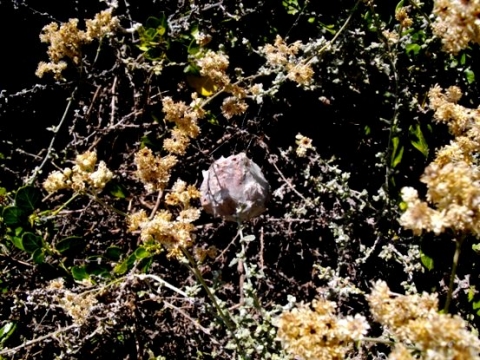 This ebbing Helichrysum plant in coastal scrub near Hermanus still serves to uphold the nest of a rain spider, possibly Palystes superciliosus. There are more local species in the genus to choose from, unless one spots and studies the home owner or her children.

P. superciliosus occurs widespread in South Africa, also in gardens from where they tend to visit human houses. A rain spider builds no web, hunting nocturnally for food like geckos. After mating early in summer, the female builds a grey sac with silk she produces herself and some leafy material added. This nest is from about 6 cm to 10 cm in diameter. Inside the nest she lays 50 to 300 eggs and protects the home until the baby spiders hatch after about three weeks. Rain spider nests are often seen suspended from a few twigs in clear view among shrubs in the veld and garden.

The Helichrysum where this spider chose to nest is called kooigoed (bedding). One of the supposed advantages of using this plant as a soft mattress when sleeping in the veld is its tendency to discourage insects, adding to both the physical comfort and the peace of mind of the sleeper.

The habit of rain spiders, which aren’t insects, to use these plants, may make people think again before using kooigoed for a peaceful rest. The avoidance tendency will be strengthened by the knowledge that wasps preying on these spiders may be attracted. Unless there is a firm plan to rise bright and early before any wasps become active. Thoughts of receiving unannounced visitors at night in the veld may keep some awake for a while (Wikipedia; www.spiderclub.co.za).