Home » HABITAT » Habitat diversity » Oopelta granulosa, a land slug
Back to Category Overview
Total images in all categories: 11,544
Total number of hits on all images: 6,627,317 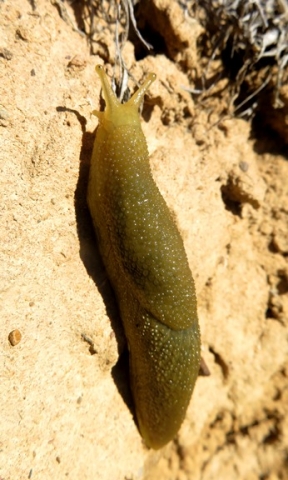 This South African citizen may be the granular Capeslug, a slug or land slug without shell, commonly called a terrestrial gastropod mollusc.

There is a saddle-shaped mantle reaching over halfway down its back on the brown skin that is covered in many tiny protrusions. The whole underside is a foot with distinct fringe along the sides. The longer, upper tentacles are optical, the lower one in view sensory.

There is no he or she in the slug land of it, slugs being hermaphroditic, possessing both male and female reproductive organs. They do mate followed by laying of eggs, but that is not quite the whole story for all slug species. Apophallation is a process by which certain kinds of slugs chew off their own or the partner’s penis after sex to free themselves. Some can even continue to breed after that as females only.

When this slug visits a university, as some of them are known to do voluntarily or in containers, there is the possibility of it being called Oopelta granulosa, not a name Capeslug mother-fathers would use.

Molluscs have soft, unsegmented bodies, many of the species wearing shells. Apart from those without shells there are also ones with tiny reduced shells and ones with internal shells, the retained vestiges of earlier shells flaunted by some ancestors.

There are about 85 000 extant species of molluscs, the ones currently living on earth and about the same number of extinct species, known from mollusc fossils to have existed in the past.

Many kinds of molluscs are still unknown to science, as reasons to study them grow snail-like. People choosing to devote their life curiosity to slugs are not that many either.

Molluscs live in aquatic or damp habitats, sometimes on the ground. This one was seen climbing a steep donga slope, slowly using its one large, flat foot. It was met by the camera crew, intrigued by it as elephants were few, at the southern border of Namaqualand near Nieuwoudtville. The guess is, it was probably inspired for a climb by the spring flower display, hoping to nibble on a daisy in about a day or whenever it reached the top.

Although the earthen wall was less than half a metre high, for a slug it may as well have been Everest, even Everclimb. Keeping moist is a major life undertaking for slugs, so mountaineering in full sunlight is not a generally expected undertaking, although Einstein Slug may not be hatched yet.

Slug food is diverse: organic matter of many kinds including leaves, lichens, mushrooms, carrion, other slugs and earthworms. What really gets them is the lethal slug food administered by people who deny slugs the privilege of eating strawberries, lettuce and many planted fruit, flowers and vegetables (Wikipedia).