Home » HABITAT » Habitat diversity » Philenoptera violacea and browser
Back to Category Overview
Total images in all categories: 12,091
Total number of hits on all images: 7,393,147 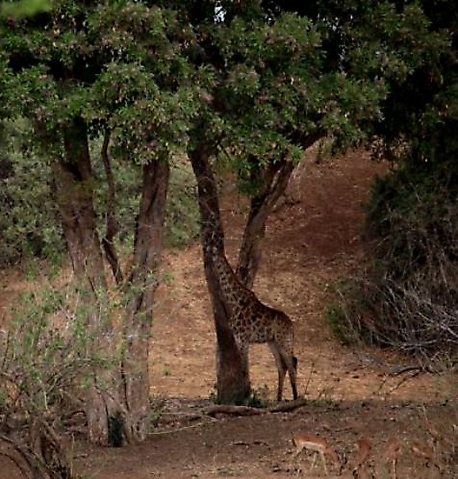 Browsers eat leaves as high as they can reach, sometimes establishing a “browsing line” for their species in their permanent home region or living area of the moment. In this way fondness of the leaves of a particular kind of tree may bare the stems up to different levels, depending on tastes and preferences of browser species and trees present in a region.

The number of trees and the numbers and mobility of the animals will determine how quickly or strongly this is manifested. Not many can share once giraffes have established their ridiculously high browsing line.

Trimming of lower leaves and branch-tips result in shady rest areas, useful to all those opting for the ample lookout. The shy ones preferring to watch while remaining unseen, shun the open places. They favour refuge under the unpalatable bushes that are allowed by all to keep their leaves.

High browsing lines may affect tree wellbeing. The giraffe compensates by reprieving leaves low down. Elephants pluck branches low and high, sometimes followed by pushing the tree over for reaching what may be relished at its top. When the roots are exposed, they may target this additional delicacy. Such pruning is only beneficial up to a point, as overpopulation of elephants in some areas or reserves demonstrates.

The real big trees near rivers reach a size of comparative safety when many other palatable options are present, allowing some to grow beyond the vulnerable size. Popular open spots in the bush also lose their grass cover and small shrubs from trampling by many feet.

The impalas in picture don’t contribute to browsing here. Firstly, the leaves are beyond their reach, but more importantly they mainly graze, preferring grass shorter than 40 cm. Impala do browse to some extent as a secondary food option, but won’t stand up against a bush or tree to pick choice leaves at greater height.

The long-necked, impala look-alike in East Africa, the gerenuk, also known as the giraffe gazelle, is predominantly a browser. It also behaves like the domestic goat, standing up on its hind legs against shrub and tree, stretching its extraordinary long neck to reach the "better" leaves at height. Still, they are comparatively small animals, weighing less than impalas.

Whatever may be browsed or grazed in the veld becomes more in demand during scarcity. When food supplies dwindle in severe drought, causing famine, leaf preferences are relaxed and later abandoned to include whatever is marginally edible. Veld is then denuded, the less palatable consumed with low relish, the emaciated animal bodies not benefiting much until only bleak and barren leaflessness remains.

By the rainy season after years, some or many will be gone. Sad, but the stressed vegetation gains respite from reduced demand facilitating its recovery. Nature functions in many concurrent cycles, short and long. The longer ones are not always obvious to the observer (Riëtte, 2016; Wikipedia).