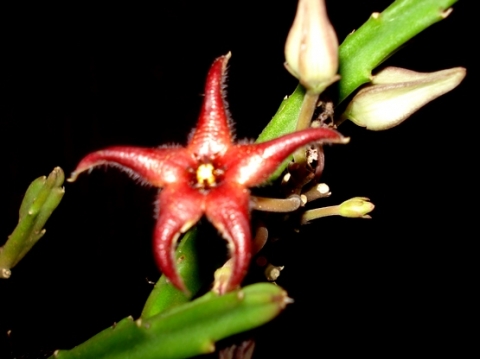 The visible differences are in the long hairs growing on the margins of the plant in picture, a slightly lighter, redder corolla with less prominence in the transversal ridges or wrinkling on its surface. The stretch of the corolla in bold protrusion of its centre is also less pronounced in this relaxed, bandy-legged corolla.

Pale, buff buds on long pedicels and in different stages of development show their long protruding tips promising long narrow lobes in the open flowers to come. The smallest bud present illustrates the early protective function of the sepals, easily forgotten behind the corolla later.

The early dropping off of the rudimentary stem leaves from their tubercular bases has already happened here on young looking stems in about half the visible instances (www.redlist.sanbi.org).