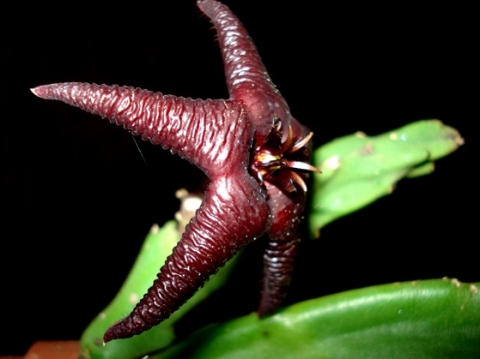 Neither the flower, nor the stem of Stapelia hirsuta var. baylissii confirms the logic of positioning this plant in the S. hirsuta taxon, although there are small indications of hairiness on the outer corolla surfaces. The lobe margins curve down so much in the convex corolla surface that little of this remains to be seen in the photo.

On its inner surface, the dark brownish purple corolla is shiny, covered in transversal wrinkling or small ridges. The five corolla lobes appear like separate limbs, rounded to the base from gently curving indentations or valleys right into the corolla centre.

The corolla seems to be thrusting the corona in its centre forward boldly. The outer corona lobes are lower and broader than those of the inner corona, nearly linear and curving out over them.

The photo was taken in March.