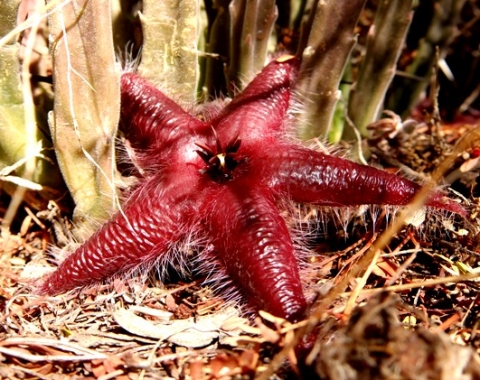 Stapelia hirsuta var. vetula, the shaggy stapelia, is a stem succulent and a carrion plant.

The stalked flowers grow from the stem bases. The flowers have large, five-pointed, star-shaped corollas varying much in colour and hairiness. Some of the other varieties of S. hirsuta have shorter stubby corolla lobes. Mostly maroon to purple or brown in colour, there may be cream lines across the lobes to go with the transverse wrinkles typical of S. hirsuta flowers. It is unsure whether these creamy lines occur on var. vetula; none were seen on the plants photographed.

The hairiness on the corolla doesn’t extend to the wrinkled, upper central parts of the lobes, while becoming long and dense near the lobe bases and margins; but quite variable.

Flower diameter varies from 5 cm to 14 cm. Flowering happens from autumn to spring.

S. hirsuta in all its varieties is distributed widely in the Northern, Western and Eastern Cape, from Namaqualand and the Little Karoo to Humansdorp. Var. vetula is thought to be found in the Little Karoo and westwards to mountain slopes of the Western Cape. This photo was taken in the veld south of Oudtshoorn. The habitat here is lowland clay or loam soils in many vegetation types excluding fynbos.

This variety is not considered to be threatened in its habitat early in the twenty first century (White and Sloane, 1937; Vlok and Schutte-Vlok, 2010; www.redlist.sanbi.org).