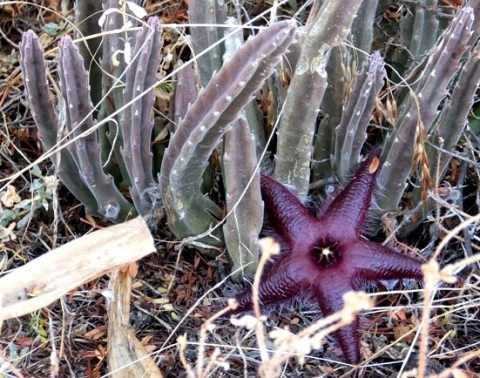 Stapelia hirsuta var. vetula grows erect stems in a dense clump to heights around 30 cm. The stems are four-angled with tiny, soft leaves that are regularly spaced up the four stem ridges and channelled between the ridges. The leaves are usually short-lived, leaving whitish scars when they fall. Stem colour may be dull green to grey-purple, varying over the seasons.

The plant has several forms, the number depending on the prevailing tendency of splitting or lumping in botanist behaviour of the times. Not all the forms had been collected and described at the same time, adding to the fun and excitement of a few Europeans as outlying forms brought from the Eastern Cape and Richtersveld became known in Western Europe.

In the early days the travellers, adventurers and dedicated plant collectors hazarded the hills, valleys and rivers near (and sometimes far from) the main or trade routes, to discover as much as possible or to become rich and famous from their exploits.

The recipients of the spoils in old world comfort paid for bragging rights of ownership and knowledge, writing clever or other stuff about the weird plant arrivals landing in their laps. Knowing none of the hardship, they sometimes got the plant stories wrong too. Knowledge grows incrementally, the inevitable mistakes causing correspondence, polemic and reputations.

The forms of S. hirsuta found first near Cape Town and Paarl no longer exist in some of the densely populated regions of their original distribution (White and Sloane, 1937; Vlok and Schutte-Vlok, 2010).