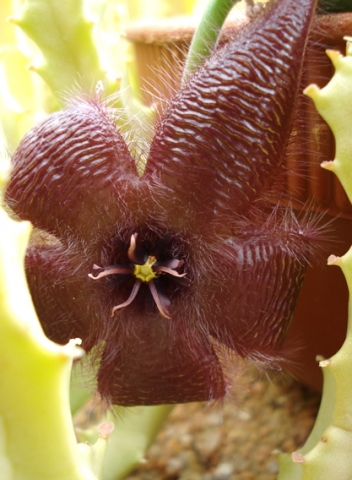 Stapelia hirsuta var. hirsuta corolla lobes are hirsute as the specific and variety names indicate. The fairly sparse hairs are long and pale to whitish. These hairs are concentrated near the corolla centre and on the lobe margins, particularly in the sinuses where the lobes meet, but almost absent from the lobe surfaces.

The pinkish purple corolla surface is wrinkled, often in transversal lines that may be marked yellow or cream. The obscure, dark patch in the flower centre is the spreading to slightly ascending outer corona, blackish sometimes with some purple. The lobe tips of the outer corona recurve; they are sometimes three-toothed or obtusely pointed. The inner corona lobes with pale tips spread from the centre above the outer corona.

S. asterias, its previously recognised varieties S. asterias var. lucida and S. asterias var. gibba, as well as several S. hirsuta and S. patula varieties (and more) have all been sunken into this taxon. Expect the specimens encountered to be variable.

S. hirsuta var. hirsuta is distributed in the Western, Eastern and Northern Cape. The species is not considered to be threatened in its habitat early in the twenty first century (White and Sloane, 1937; www.redlist.sanbi.org).