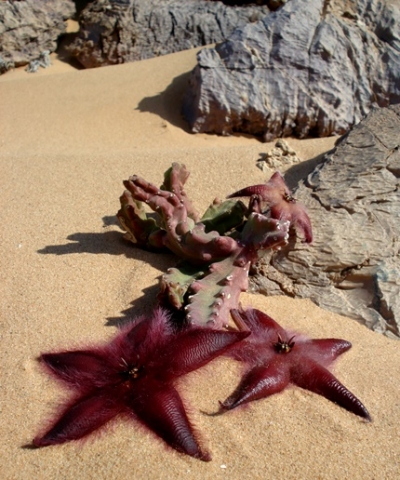 Stapelia hirsuta var. gariepensis, previously Gonostemon gariepensis, S. gariepensis and more, en route along the unfolding of its scientific identity, is a stem succulent that forms clumps and grows to 12,5 cm in shade, shorter in full sun.

The stems are four-angled with small, white-tipped tubercles up the stem ridges where the rudimentary leaves drop off early. The stem surfaces may be flatter or more deeply channelled, possibly associated with moisture availability. Stem colour is more often dull purplish red than green, sometimes a little grey-green or dark green suffused in the red.

The five corolla lobes of the flower spread and taper to acutely pointed tips. Flower colour is variable with age, from shiny maroon or purple on young ones to paler orange-brown and creamy yellow as they mature. Long, soft hairs are dense in the corolla centre around the corona and along the lower parts of the lobe margins. The convex upper lobe parts are shiny and wrinkled transversely with little signs of hair.

The species distribution is close to the Gariep River in the Richtersveld and across the river in southern Namibia. The habitat is arid, exposed and sandy. The species is not considered to be threatened in this habitat early in the twenty first century (Williamson, 2010; iSpot; www.redlist.sanbi.org).