Home » GENERA Q-S » Stapelia » Stapelia pillansii
Back to Category Overview
Total images in all categories: 10,221
Total number of hits on all images: 4,874,889 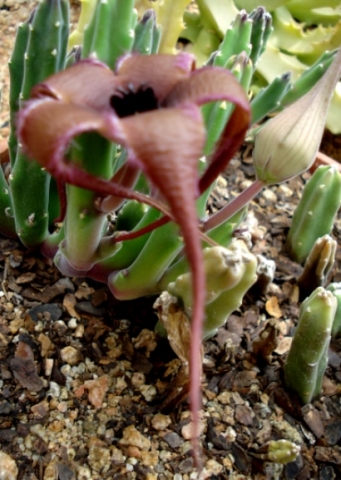 Stapelia pillansii is a stem succulent growing a crowded clump of branched, erect stems to heights from 10 cm to 13 cm. The square stems, decumbent at the base, have concave sides, their angle ridges not much compressed. Stem surfaces are green and velvety with very fine hairs, the tubercular teeth small with tiny, pale rudimentary leaves at their tips.

The species is distributed in the Western Cape between Touwsrivier and Laingsburg, known near Matjiesfontein and Prince Albert, as well as in the Little Karoo around Ladismith. The plants grow on north-facing slopes of low shale or tillite hills. The species is not considered to be threatened in its habitat early in the twenty first century, although it is range-restricted and uncommon (White and Sloane, 1937; www.redlist.sanbi.org).