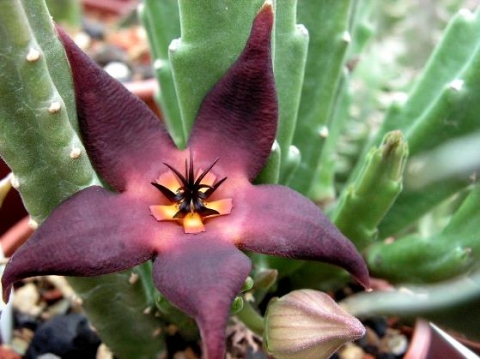 The dull purple inner surface of the Stapelia hirsuta var. vetula corolla is hairless and faintly wrinkled transversely on its fleshy, attenuating lobes. The wrinkles may have been the cause of the Latin name, vetula, meaning little old, possibly resembling the skin of an old woman. Its colour pales in the centre to pinkish and whitish around the corona.

The outer corona has five oblong lobes spreading flat upon the corolla. Their tips are nearly rectangular apart from small central protrusions. Its colour is two-toned, pale yellow in the basal half, pinkish orange in the outer half.

The inner corona is erect, dark purple to nearly black in parts. Its five lobes are two-horned: a shorter, broader, lower horn that tapers to an acute tip and a longer, narrow, upper horn that coheres with its four mates at the base before curving out to an almost needle-like tip (White and Sloane, 1937; Frandsen, 2017; Vlok and Schutte-Vlok, 2010).