Home » GENERA Q-S » Stapelia » Stapelia hirsuta, a hairy subject
Back to Category Overview
Total images in all categories: 10,174
Total number of hits on all images: 4,832,142 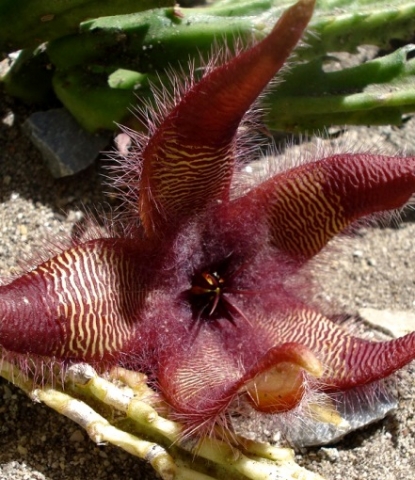 Several Stapelia hirsuta photos in this Album show the flower to be strongly reflexed in the corolla lobes, the flower centre thrust forward in a convex surface. The flower in picture, long-haired on the margins and densely so in the centre around the corona, has its corolla lobes curving forward.

Hairiness is a common feature in the Stapelia genus, although it may create more identification problems than are solved by simply banking on hair.

In 1937 White and Sloane recognised nine varieties of S. hirsuta in their three volume book, The Stapelieae. In 1997 Smith, et al, recognised none in their List of Southern African Succulent Plants, although they did include the varieties for several other Stapelia species. In 2017 the SANBI website, www.redlist.sanbi.org, listed five varieties of S. hirsuta, not one of them named the same as any of those given in the 1937 list.

And when you deal with hairs on a plant, be sure to distinguish puberulous from pubescent, hispid from hirsute, strigose from strigillose, tomentose from tomentellous, villous from villosulous. And do describe a leaf, calyx, stem or fruit appropriately as pilose, downy or by any of the yet other hairy designations dear to the hearts of botanists.