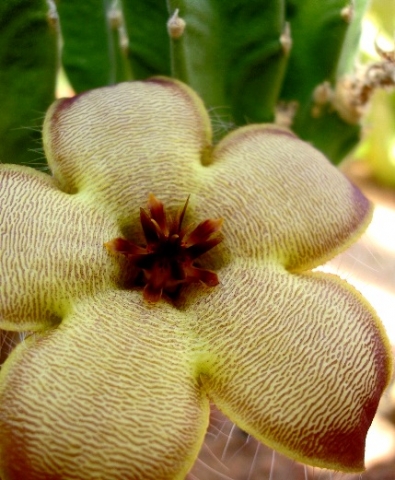 Stapelia grandiflora var. conformis is a clump-forming stem succulent reaching heights from 15 cm to 30 cm. It was previously known as S. macowanii and by several other names as its relationships with the closest other taxons in its genus and family became clearer to botanists over the years.

The flower has a pale cream inner surface upon its corolla, the five lobes curving strongly back, hiding their tips. Delicate brown-red lines run transversely across the corolla surface in a lace-like, irregular pattern, the colouring tending to become more dominant towards the largely obscured lobe tips. Sparsely scattered long white hairs protrude from the back, the outside corolla surfaces or margins. The sepals of this flower are hairier than the corolla.

The flower centre shows five indentations like seams continuing the separation of the lobes into the corolla tube around the corona. The inner corona lobes are each formed of a single wing-shaped part, sometimes with a tooth-like projection at its winged tip that is occasionally notched.

The flower odour has been compared to “a slightly fermenting Stilton (blue) cheese”.

The species distribution lies in the inland karoid part of the Eastern Cape near Jansenville and Albany, maybe in the region in between. This plant is not often seen. Still, the species is not considered to be threatened in its habitat early in the twenty first century (White and Sloane, 1937; www.redlist.sanbi.org).