Home » GENERA Q-S » Stapelia » Stapelia grandiflora var. grandiflora and fly
Back to Category Overview
Total images in all categories: 10,355
Total number of hits on all images: 5,058,203 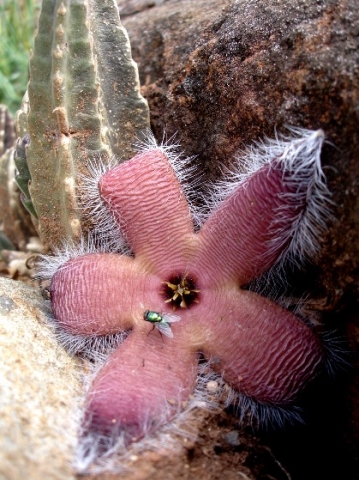 This Stapelia grandiflora var. grandiflora flower is hosting one of its common green fly pollinators. Everyone in insect world must eat, a characteristic well utilised by flowers of the world, offering something to itinerant wrigglers, messy eaters and general messers about for pollen transportation.

The flower appearance here is dominated by the long bushy hairs along the corolla lobe margins. The lobe surfaces are more finely ridged or wrinkled near the corolla centre than towards the outer parts of the lobes. Inner and outer corona lobes are small in the flower centre, yellow and maroon in colour.

The angular indentations between the vertical stem ridges render the stem surfaces markedly channelled. The velvety stem surface pubescence or fine hairiness is less noticeable upon this ageing stem than on young ones.

Some of the upper stem ridge teeth still have their rudimentary leaves, most having already dropped off. The leaves are tiny, pale yellow and triangular, pointing upwards. They hardly play a role in photosynthesis, being negligible compared to the large green stems (White and Sloane, 1973).