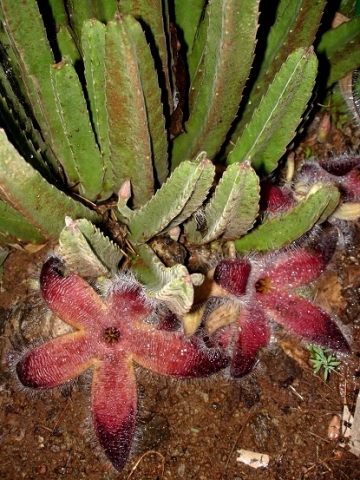 Stapelia grandiflora var. grandiflora is mainly known as a plant of the Eastern Cape, but it also grows in the Western and Northern Cape, the Free State and Mpumalanga. This plant was photographed during March at Mazelspoort.

The robust stems may reach 30 cm. They are square in cross-section with prominent, upturned, soft teeth along the four corners that are markedly compressed on their sides to form distinct ridges.

This plant became famous early in South African botanical history after it was first collected by Francis Masson near the Sunday River in 1792. It was then thought to be the largest flowering Stapelia, but about six species with similar size or bigger flowers have been found since.

First flowers of the season (autumn) will be the biggest. The number of flowers on a plant growing well will increase during the season, but the later ones will be a little smaller, the seasonal tank running low (White and Sloane, 1937).