Home » GENERA Q-S » Stapelia » Stapelia gigantea and its pollinators
Back to Category Overview
Total images in all categories: 10,342
Total number of hits on all images: 5,039,977

Stapelia gigantea and its pollinators 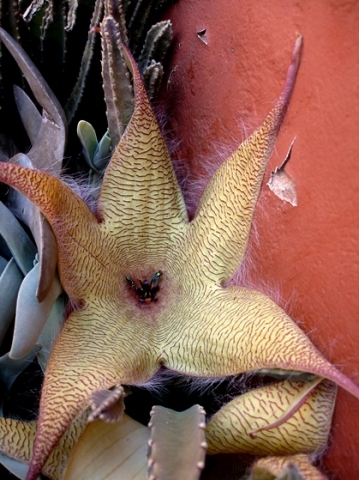 Previous
Image 6 of 38
Next

There used to be a Stapelia nobilis looking like the plant in picture. It is no more as a separate species, today sunken into S. gigantea. Geographically S. nobilis was associated with the Limpopo province, while S. gigantea is more widely distributed from KwaZulu-Natal and Limpopo to Malawi and Zambia.

The stems of S. nobilis were thought to be somewhat smaller and thinner, their angles less compressed than S. gigantea and the plant generally more compact. The flower was also smaller in S. nobilis, the bell-shape of the corolla centre distinct and corolla hairiness more.

Now all these differences, still present, are taken to be intraspecies in nature. The kind of differences that allow us to recognise individual human beings and their ethnic origins; individuals with unique identity and group affiliation, but all still people of the Homo sapiens species (White and Sloane, 1937; JSTOR; www.redlist.sanbi.org).