Home » GENERA Q-S » Senecio » Senecio erosus buds
Back to Category Overview
Total images in all categories: 11,544
Total number of hits on all images: 6,625,948 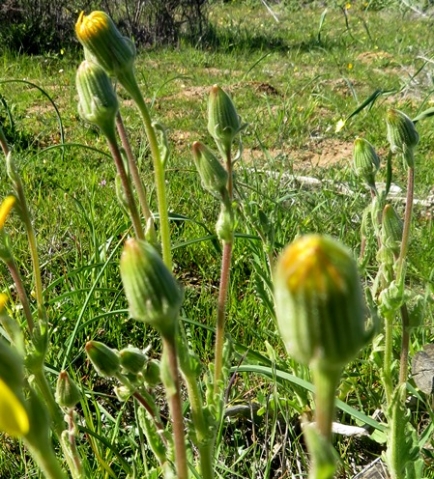 These Senecio erosus buds show both the single row of very narrow green involucral bracts around the unopened flowerheads and the short, pointed bracteoles at the base of the involucres. There are more bracts than bracteoles per flowerhead.

The following is notable: There is a slight thickening of the peduncles immediately below the heads. There is a fair amount of colour variation in the peduncles. The younger buds are somewhat cone-shaped when the bracts still join at the tip. The ones ready to open have become cylindrical from upper floret bulging. The small and narrow upper stem-leaves near the buds are well-spaced, alternating up the stems, sometimes far below the bud (Manning and Goldblatt, 1997; Bond and Goldblatt, 1984; iNaturalist).