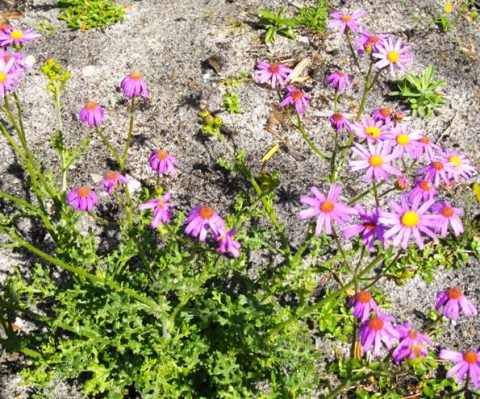 Senecio elegans, the veld cineraria, is an erect, hairy annual reaching heights from 30 cm to 1 m.

The pink or mauve daisy flowers grow in dense corymbs. The involucre at the base of the flower is cup-shaped with conspicuous black-tipped bracteoles. Each flower-head measures about 2,5 cm across. Flowering happens in spring. The fruits are fluffy white balls, the seeds wind-dispersed.

The species distribution is coastal from southern Namaqualand to the Eastern Cape. The habitat is sandy coastal slopes and flats. The species is not considered to be threatened in its habitat early in the twenty first century (Manning, 2009; Bean and Johns, 2005; Bond and Goldblatt, 1984; http://redlist.sanbi.org).