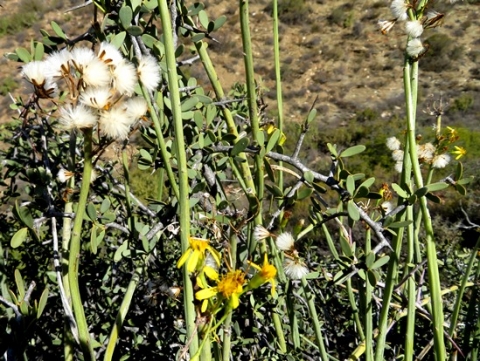 Senecio junceus, previously known as Brachyrhynchos junceus and commonly known in Afrikaans as sambokbos (sjambok bush), is a shrub growing to heights from 60 cm to 1 m.

Its succulent, pale green stems branch at the base. They are almost leafless and erect. The leaves are small and scale-like, dropping off early, leaving only small scars on the smooth, sometimes longitudinally channelled stems.

The species distribution ranges from the Richtersveld and Namaqualand along the west coast to the Western Cape and coastally to the Eastern Cape as far as Port Elizabeth, as well as inland in the Little Karoo and southern Great Karoo.

The habitat is arid or semi-arid lower slopes where the plants grow in clay soils among stones and rocks. The species is not considered to be threatened in its habitat early in the twenty first century (Vlok and Schutte-Vlok, 2010; Bond and Goldblatt, 1984; www.redlist.sanbi.org).