Home » GENERA Q-S » Senecio » Senecio junceus flowerheads
Back to Category Overview
Total images in all categories: 11,905
Total number of hits on all images: 7,155,643 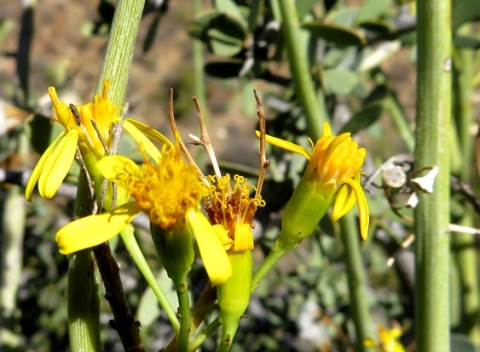 Senecio junceus without its flowerheads might be mistaken for yet another Euphorbia mauritanica shrub in the veld where both grow. The flowers are, however, a dead giveaway, clearly Asteraceae and very different from Euphorbiaceae.

The flowerheads grow in fairly small, almost flat-topped clusters at or near stem tips. There is one row of about five or six yellow ray florets per flowerhead around a small bunch of disc florets; also only one row of green involucral bracts with pointed tips holding it all together below. Some tiny bracteoles, mostly turned brown in the photo occur low down on the involucres and the pedicels in picture.

The ray florets are female, the disc florets five-lobed, both male and female i.e. bisexual or hermaphroditic. Flowerheads are about 1 cm in diameter. Flowering happens from midsummer to mid-autumn, following rain (Vlok and Schutte-Vlok, 2010; Bond and Goldblatt, 1984).