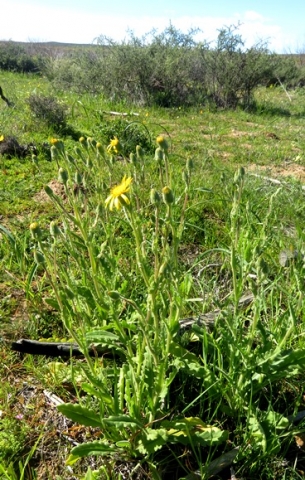 Senecio erosus, the sticky-leaved wild cineraria, sticky daisy or smooth groundsel, is a tufted perennial reaching heights from 30 cm to 60 cm. The foetid plant is covered in glandular hairs bringing about the stickiness.

The species is mainly distributed in the Western Cape as far east as Swellendam and in the far southwest of the Northern Cape, the south of Namaqualand. The photo was taken at Matjiesfontein near Nieuwoudtville.

The plants grow in gravelly clay, shale and sandstone derived soils in renosterveld, succulent Karoo and fynbos. The species is not considered to be threatened in its habitat early in the twenty first century (Manning and Goldblatt, 1997; Bond and Goldblatt, 1984; iNaturalist; http://redlist.sanbi.org).