Home » GENERA Q-S » Senecio » Senecio elegans at Kleinzee
Back to Category Overview
Total images in all categories: 11,901
Total number of hits on all images: 7,141,858 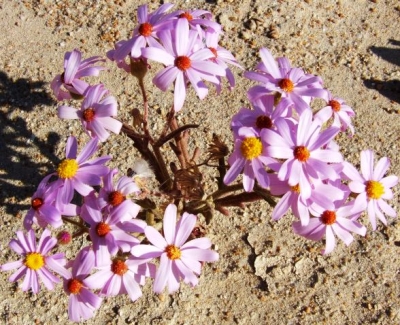 Senecio elegans, the wild cineraria or strandblommetjie in Afrikaans, grows in the wild along the south and west coasts of the Cape. Some authors place it in a smaller distribution excluding Namaqualand, but this one was found far to the north. Seed sown in autumn in sandy or other well-drained soil and watered throughout the winter has a good chance of yielding abundant summer flowers.

The plant has escaped into nature from horticultural introduction in New Zealand, California, the Azores and elsewhere. In the USA this plant is commonly known as the red-purple ragwort or the purple groundsel. It tends to become naturalised in areas with Mediterranean type climates, or even invading as a problem plant or weed.

Good intentions about controlled introduction of a foreign species into countries far away from its natural habitat often become unstuck through invasion. There is such big risk when introducing a plant in an alien environment. We simply cannot safely predict what might happen.

For this reason many countries have legally enforced control measures. The realization of exactly how antisocial circumvention of these rules really is, grows with every story about cost, disruption and loss from rampant invaders. Such stories should serve as a strong deterrent as they are true anywhere in the world (Wikipedia).