Home » GENERA Q-S » Senecio » Senecio erosus flowerhead
Back to Category Overview
Total images in all categories: 11,894
Total number of hits on all images: 7,134,987 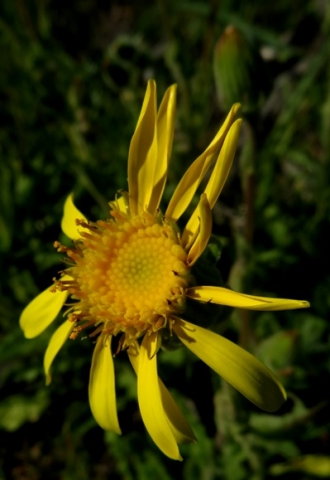 The yellow flowerheads of Senecio erosus grow at the tips of erect branches. Similar to Senecio flowerheads in general, there is only one row of narrow, green involucral bracts around the flowerhead base.

One sparse row of narrowly oblanceolate ray florets surrounds a flat disc comprising numerous florets. The outer row or two of disc florets in picture have opened, appearing unkempt from stamens, styles and floret lobes protruding and pointing in all directions. The still closed buds in the disc centre show only their tops, neat yellow dots compactly clustered, waiting their turn for exuberant reaching for the sky, albeit not much of it.