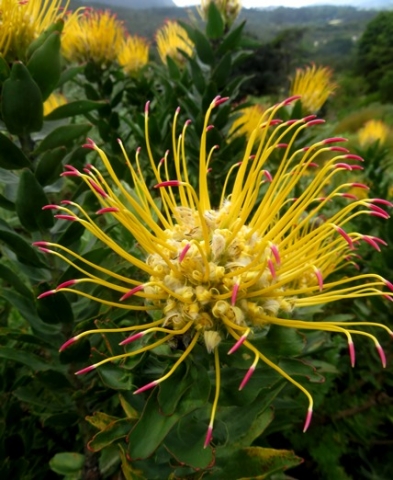 There is a later stage in the Leucospermum grandiflorum flowerhead development when the initially erect styles spread somewhat into a wider, flat-topped shape of the head.

The curved, red pollen presenters are aligned in direction, accentuating the spiral effect present. The spiralling of the styles and their pollen-presenter tips in this species is usually clockwise but clearly not all styles in picture have been informed about this convention. One of the plant’s common names, grey-leaf fountain pincushion, is descriptive of the spiralling feature.

The styles are still yellow here, on average slightly over 7 cm long. Some younger heads in the photo background show the more erect, closer-knit grouping of the styles. Later in the flowerhead development, the styles may again be close together, when the flowerhead, i.e. essentially the styles, turns orange and finally red before withering.

The specific name, grandiflorum, is derived from the Latin word grandis meaning large and floris meaning flower, referring to the size of the flowerhead of the plant.

Flowering happens from midwinter to early summer. The photo was taken in November.

The ripe seeds are released about two months after flowering. The seeds are attached to fleshy elaiosomes sought after by ants as food. The ants carry the seeds to their nests, serving the plant in seed dispersal, a mutually beneficial arrangement for plant and insect. This deal is similar to the plant’s cooperative pollinator feeding "agreement" with Cape sugarbirds, possibly also with other birds and some insects.

Business thrives in nature. One can learn where to look by focussing on need fulfilment and problem solving of any living species. They all have needs, to be fulfilled by someone else in their particular ecological systems.