Home » GENERA I-L » Leucospermum » Leucospermum grandiflorum
Back to Category Overview
Total images in all categories: 12,068
Total number of hits on all images: 7,360,588 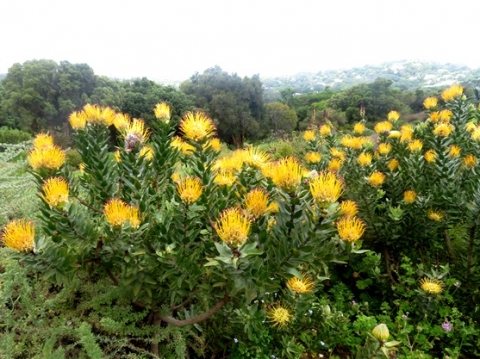 The species is endemic to the Western Cape, limited to the southwestern parts near Paarl and Malmesbury, possibly also (still) around Belville and to the north maybe around Klawer and Clanwilliam. The plant is known to grow (or has grown in the past) on Paarl Mountain, Simonsberg at Stellenbosch, Paardeberg at Malmesbury and Durbanville Hills.

The habitat is fynbos on granitic slopes, sandy fynbos flats and renosterveld on granite, silcrete and shale. The plant population has markedly decreased, probably by more than half since the middle of the twentieth century. This occurred due to habitat loss or degradation caused by farming or other development, plant harvesting and alien plant invasion.

The species is considered to be endangered in its habitat early in the twenty first century (Bond and Goldblatt, 1984; Eliovson, 1983; iNaturalist; Wikipedia; http://pza.sanbi.org; http://redlist.sanbi.org).