Home » GENERA I-L » Leucospermum » Leucospermum muirii
Back to Category Overview
Total images in all categories: 11,506
Total number of hits on all images: 6,493,842 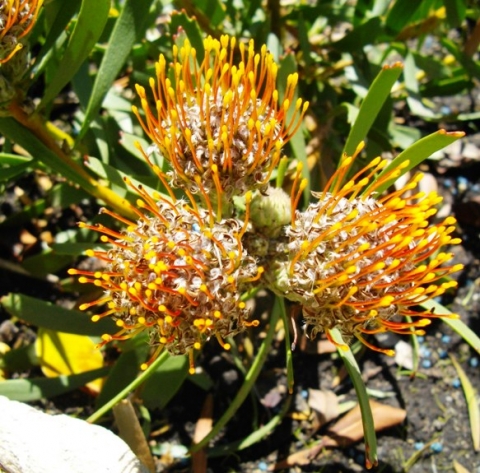 Leucospermum muirii, the Albertinia pincushion or bloukoolhout (blue cabbage wood) in Afrikaans, is an erect, rounded shrub, growing to 1,5 m in height. This is a single-stemmed, reseeder that does not resprout after veld fires.

The plant forms part of the Tumiditubus or wide-tubed section of the Leucospermum genus, characterised by erect or spreading, single-stemmed plants bearing flowerheads with conical bases.

The flowerheads at stem-tips are yellow, turning orange as they mature. L. muirii flowers from mid-winter to spring. The plant resembles L. truncatum, but the flowers are less hairy and the leaves narrower.

The nut-like seeds are produced a couple of months after flowering. Seed dispersal is performed by ants that feed on non-vital parts of the fruits. Later the ants may again remove the leftovers, the seeds from their nests. The still intact seeds germinate from winter rain on the ants’ refuse dumps.

As the common name suggests, the species distribution is limited to the flat area near Albertinia, its range extending towards the coast near Still Bay.

The plants may occur in dense stands in deep, sandy, limestone soil. It is considered to be threatened in its habitat early in the twenty first century, due to habitat degradation and destruction from farming, road verge clearing and other human activities (Bond and Goldblatt, 1984; Eliovson, 1973; www.plantzafrica.com; http://redlist.sanbi,org).