Home » GENERA I-L » Leucospermum » Leucospermum heterophyllum
Back to Category Overview
Total images in all categories: 12,061
Total number of hits on all images: 7,360,060 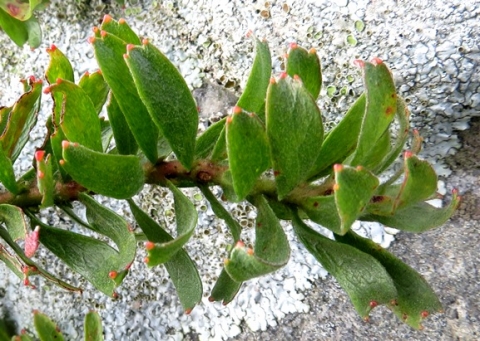 Leucospermum heterophyllum, commonly the trident pincushion and in Afrikaans the rankluisie (little rambling louse), is a prostrate, mat-forming shrub becoming about 5 m in diameter and 15 cm in height.

Long, trailing branches radiate from the stout rootstock of the resprouter after fire. The leaves in picture mostly have three apical teeth that gave the plant its common name. The louse reference occurring in many Afrikaans Leucospermum common names is derived from the stigmas or pollen presenter tips of the styles seen in open flowerheads.

The species distribution is restricted to a coastal region from Elim to De Hoop in the south of the Western Cape.

The habitat is coastal fynbos, mainly in Elim ferricrete fynbos, but also in limestone and sand fynbos, as well as renosterveld, strandveld and wetlands. The species is considered to be endangered in its habitat early in the twenty first century due to habitat loss, degradation and pollution, also from alien plant invasion (Mustart, et al, 1997; Bond and Goldblatt, 1984; iNaturalist; Wikipedia; http://redlist.sanbi.org).