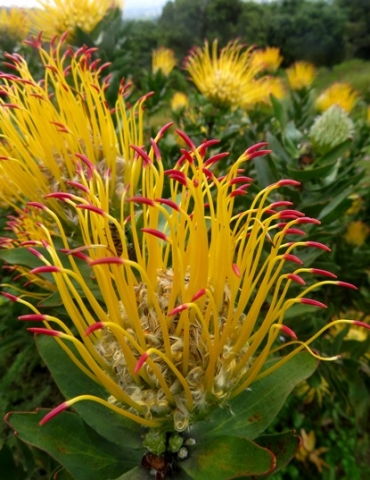 The open Leucospermum grandiflorum flowerhead is a spectacular affair, commonly known as the rainbow pincushion. Stiff, yellow styles are erect or slightly out- and sideways-curving. The silvery, convoluted perianth remains lie collapsed around their bases.

The real, exaggerated curving occurs in the red-purple pollen presenters at the style tips, rendering the flowerheads two-tone in colouring. These pointed style tips point everywhere, like the noses of a flock of nosy flamingos settled in their favoured swamp; their body language saying curiosity rather than hunger.

There is a groove in each pollen presenter that functions like a stigma for accepting the right pollen grains on arrival, not quite the way flamingos ingest their food (Bond and Goldblatt, 1984; Eliovson, 1983; iNaturalist; Wikipedia; http://pza.sanbi.org).