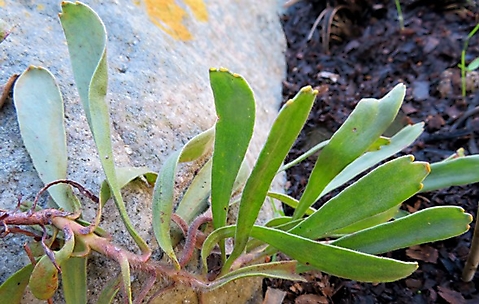 This must be the Cape’s pincushion with the longest name. The specific name, is derived from the Greek words hypo meaning under, phyllo meaning leaf, karpos meaning fruit and dendron meaning tree. It is not certain what Linnaeus had in mind when he named the plant "under-leaf fruit tree" in his 1753 epic work, Species Plantarum. This book formed the basis of modern plant taxonomy, the first publication that consistently used the binomial species names of today and included all the known species of that time.

The distribution of the subspecies is in the far southwest of the Western Cape on the Cape Peninsula, the Cape Flats, the Berg River Valley and coastally to Bredasdorp.

The habitat is strandveld, renosterveld and sandy, lower slope fynbos. The subspecies is considered to be vulnerable in its habitat early in the twenty first century, due to alien vegetation invasion, habitat loss and harvesting of the plants (Manning, 2007; Bean and Johns, 2005; Bond and Goldblatt, 1984; iNaturalist; Wikipedia; http://redlist.sanbi.org).