Home » GENERA T-Z » Zaluzianskya » Zaluzianskya rubrostellata open flowers at night
Back to Category Overview
Total images in all categories: 11,276
Total number of hits on all images: 5,987,915 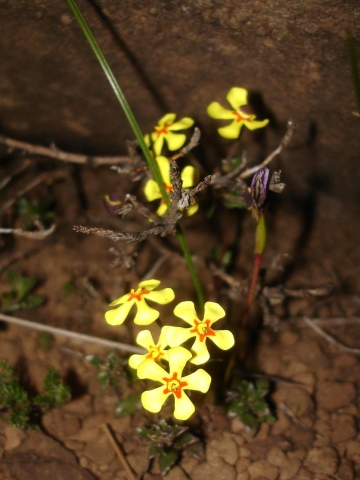 The flowers of the nocturnal Zaluzianskya rubrostellata seen here were photographed at night to find them open. The other photo of the plant given in this Album was taken during daytime when the petals are closed in bashfully folded fashion.

The corolla base is a long thin hairy tube, purplish brown on the outside. The five-lobed yellow corolla reminds of the familiar Zaluzianskya flower shape, although the angular lobe tips are unlike the commonly forked or notched ones.

A tiny orange star pattern can be seen around the flower centre. It is this star, presumably often red, that may be meant by rubrostellata (red star), the specific name. The flowers grow in clustered heads of up to five (iSpot; www.maliba-lodge.com).