Home » GENERA T-Z » Zaluzianskya » Zaluzianskya violacea
Back to Category Overview
Total images in all categories: 11,276
Total number of hits on all images: 5,987,931 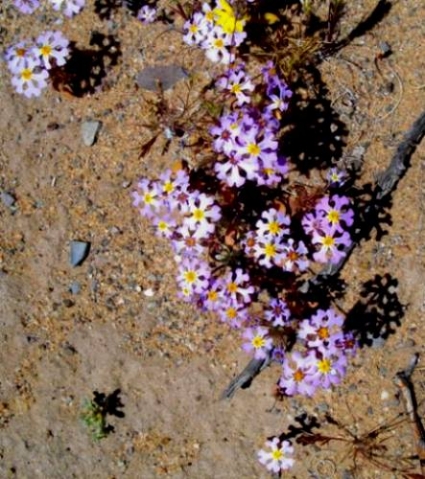 Zaluzianskya violacea, commonly the Hantam purple drumsticks or in Afrikaans as the persverfblommetjie (little purple paint flower), is an annual herb branching from the base and reaching heights from 3 cm to 15 cm.

Both stems and leaves are hairy, the stem hairs facing down. The dull green, opposite leaves are oval to elliptic, sometimes with toothed margins.

The species distribution is an inland part of the southwestern Western Cape, particularly near Calvinia and at the foot of the Hantamsberg; also into the south of the Northern Cape. This photo was taken late in August in the Ceres Karoo.

The habitat is karoid gravel and shale on flats and lower slopes where the plants grow exposed or among low scrub. The species is not considered to be threatened in its habitat early in the twenty first century (Manning, 2009; Manning and Goldblatt, 1997; Bond and Goldblatt, 1984; iSpot; http://redlist.sanbi.org).