Home » GENERA T-Z » Zaluzianskya » Zaluzianskya villosa
Back to Category Overview
Total images in all categories: 11,276
Total number of hits on all images: 5,987,928 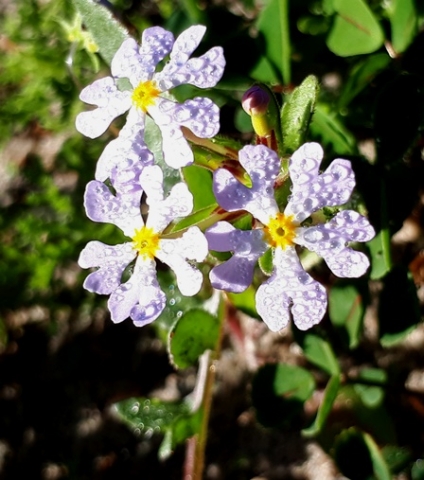 Zaluzianskya villosa, another of the Zaluzianskya herbs called drumsticks, is an annual that grows erect, green or purple stems to heights from 10 cm to 30 cm.

The stalkless leaves are elliptic with rounded to pointed tips. Upper leaves are alternate, the lower ones opposite. The leaf margins are mostly entire, the occasional one with sparsely toothed margins is seen. Leaf colour is dull green, the blades densely covered in down-facing hairs, as are the stems.

The flowers are nearly stalkless, growing in a compact, head-like spike at a stem-tip. Flower colour is white, pinkish lilac or mauve with a conspicuous yellow or orange, sometimes purple, star-shaped mark around the mouth, in the centre of the spreading corolla. There is a thin corolla tube varying in length from 1 cm to 2,5 cm. The corolla has five long lobes, each forking into two secondary lobes that are rounded to angularly tipped. The two stamens are enclosed in the tube. Flowering happens from midwinter to spring.

The species is a Western Cape endemic, found along the coast from Agulhas to Saldanha. The plants grow on sandy flats. They are not considered to be threatened in their habitat early in the twenty first century (Manning, 2007; Eliovson, 1990; iNaturalist; http://redlist.sanbi.org).