Home » GENERA T-Z » Zaluzianskya » Zaluzianskya katharinae
Back to Category Overview
Total images in all categories: 11,276
Total number of hits on all images: 5,987,789 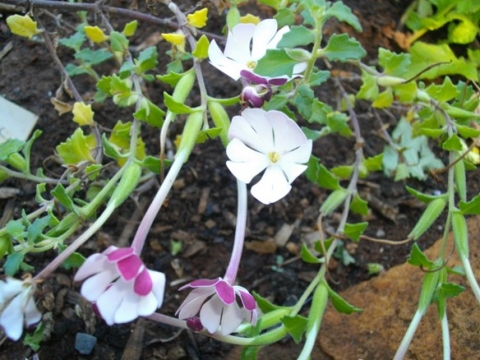 Zaluzianskya katharinae or night phlox is a spreading perennial that grows to about 50 cm in height. The stems are hairy and green when young, greyish brown when older.

The short-stalked leaves are ovate, tapering to their bases and acutely pointed at their tips. The margins have a few large, angular teeth. The leaves nearer the base are opposite while those higher up are alternate.

The flowers are axillary and sessile. Each has a short green calyx and long narrow corolla tube, opening up into a shallow bowl formed by five deeply forked lobes. The petal lobes are white on the inside and pinkish purple on the outside.

Night phlox flowers have a strong fragrance particularly noticed at night. The nocturnal flowers open only partly in daylight, fully at night.

The plant may bloom all year round, but usually mostly in summer.

The species is a South African endemic, distributed in the provinces north of the Vaal River. Its habitat is rocky ridges in grassland. The plant is not considered to be threatened in its habitat early in the twenty first century (Van Wyk and Malan, 1997; www.suncrestnurseries.com; http://redlist.sanbi.org).