Home » GENERA I-L » Lapeirousia » Lapeirousia fabricii leaves and bracts
Back to Category Overview
Total images in all categories: 11,018
Total number of hits on all images: 5,656,374 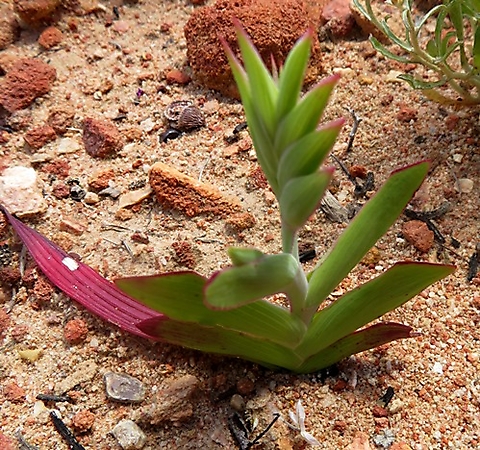 The leaves of Lapeirousia fabricii only dominate in plant appearance before the first flowers open. The series of pointed floral bracts up the stem are already starting to steal their limelight.

The lowest leaf, a cataphyll, is by now red and on the ground, its unmatched length remaining a feature. The leaves alternate fan-like in two vertical arrays, sheathing the stem. Some leaves appear obliquely truncated, their tips unusually shaped.

Each bract folds around the next upper one in regular sequence, forming the protected spaces from where flowers will emerge if all goes well (Manning, 2007; Manning and Goldblatt, 1997).